SweetWater Brewing Company, LLC has announced the launch of 420 Imperial IPA – the first line extension off of its flagship 420 brand. A fresh take on ingredients from the original SweetWater 420 Extra Pale Ale, this bold, flavor-packed Imperial IPA boasts a delicious combination of hops – creating a super-tasty, high-ABV new brew. 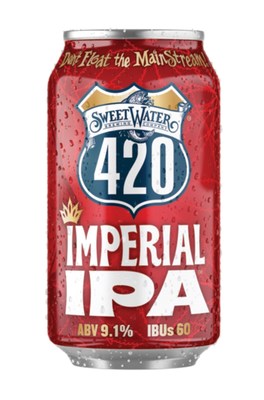 The big, deep, copper-colored Imperial IPA is well-balanced with the right amount of hop bitterness and malty sweetness, combining traditional and modern hops to create flavor and aromas of mango, peach, pineapple, citrus and pine. IPA lovers will savor the unique blend of 2-row, Munic and C70/80 grains as well as Centennial, Cascade, Columbus, Mosaic, and Sultana Midnight Wheat Hops as well as Mosaic, Sultana, Lotus, and Cascade Dry Hops in this lip-smackin’ new brew.

“Our 420 Extra Pale Ale has been on the Mount Rushmore of craft beer for 24 years,” said Brian Miesieski , Chief Marketing Officer at SweetWater. “We are taking things to a whole new level by bringing a new style to one of the most well-known names in beer – our 420 brand. This heady new brew leverages one of the most coveted innuendos and bar calls in craft, but delivers a new bigger, bolder IPA style that’s right in the wheelhouse of our brewers.”

The 420 Imperial IPA packs a punch while maintaining delicious drinkability. With an ABV of 9.1%, this brew has a higher ABV than the standard Imperial IPA. 420 Imperial IPA delivers adventurous flavors and aroma from a fresh combination of hops for added intensity and complexity without sacrificing quality, great taste, and straight-up beer drinking enjoyment.

“We took the original base recipe from our 420 Extra Pale Ale, then dialed it up with more malt and hop varieties to deliver bigger, bolder flavor and flip it to an IPA,” said Brew Master Mark Medlin. “This true-to-style imperial IPA has a malty sweetness balanced with a variety of hops to create flavor and aromas of mango, peach, pineapple, citrus, and pine. While the flavor journey is much more intense, 420 Imperial IPA still finishes clean just like its namesake.”

420 Imperial IPA is inspired by 420 and embraces the SweetWater motto of Don’t Float the Mainstream! With a bold, bright, contemporary and eye-catching brand and package design, 420 Imperial IPA is the perfect new addition to SweetWater’s refreshing portfolio, both in style and packaging. The vibrant imperial red branding of the cans adds a distinct, 420-inspired feel to SweetWater’s first true 420 line extension – and a big, bold addition to the portfolio.

This launch comes in tandem with another hard-hitting brew now available as a new limited release from SweetWater’s Dank Tank series. The 710 Hazy Double IPA is a 7.5% ABV, hazy, double-dry-hopped IPA that brings the ” freshiest” of fresh flavors and a unique blend of hop terpenes that declares another reason to toast to good vibes and free spirits. The Dank Tank is where SweetWater’s brewers go to play, with no rhyme or reason and the only requirement is that it be tasty, hoppy, and heady.

SweetWater’s 420 Imperial IPA will be available year-round on draft, 6pk and 12pk 12oz cans, as well as 19.2oz cans and can be found across the U.S. in restaurants, bars, and stores wherever the fishin’s good.

SweetWater is passionate about protecting natural resources and habitats and is recognized for its contributions to environmental initiatives throughout its distribution footprint. Supporting the conservation of some of the nation’s most threatened rivers, streams and coastlines is a cause near and dear to the brewery, as clean water is also vital to the creation of their tasty brews. 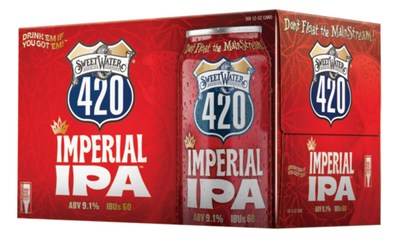 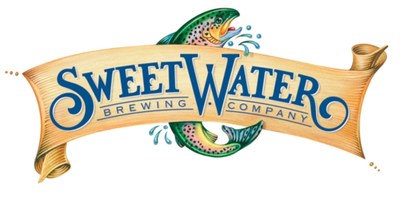 Is Aurora Cannabis On The Brink Of Default Or Telegraphing A Potential Acquisition?

Aurora Cannabis Inc. Is Once Again Making Headlines For All The Wrong Reasons………….

11 Cannabis Stocks That Have Moved Significantly In September